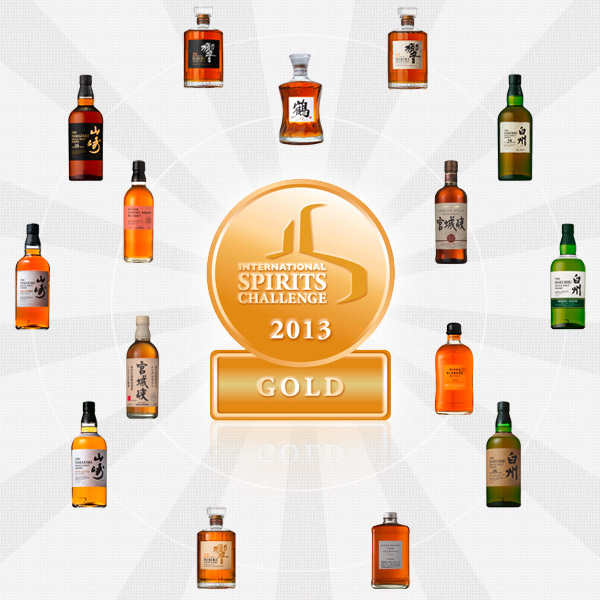 Like every year, all the alcohol companies throughout the world have the opportunity to participate in one of the most authoritative and respected spirits competition, the International Spirits Challenge. The first results of the 2013 edition have just been announced and the Japanese whiskies once again harvest a nice collection of gold medals.

Medals are awarded after a seven days blind tasting by a panel of more than 50 experts and professionals. Each product is blind tasted and awarded a score for its aroma, appearance, taste and finish. The evaluations are then collated and recorded before Trophy, Gold, Silver, and Bronze medals are awarded. The Trophies will be announced on July 17 but here are already the Gold medals won by all the Japanese whiskies:

On Suntory side, there are no big surprises with a large part of the Hibiki range of whiskies, the two oldest Hakushu and the famous Yamazaki 18 yo. More original, the Puncheon and Mizunara 2012 editions of the Yamazaki and the Heavily Peated 2012 edition of the Hakushu are also rewarded.

Concerning Nikka, the results are more surprising: no Gold medal for Yoichi’s production (only Silver medals, except for the Yoichi 20 who get a very harsh Bronze medal) and only two for Miyagikyo. Even more surprising, the Nikka Blended is rewarded with, to my opinion, a very generous Gold medal. Conversely, Nikka From the Barrel and Tsuru 17 years-old confirm their legitimate 2012 Gold medal and are joined by the Coffey Grain, demonstrating its excellent quality as well as originality (as single grain whiskies are pretty rare).

Let’s now wait until July 17 to see if a Japanese whisky is able to emerge, like in 2012, from the best to get a trophy. Anyway, congratulation to Nikka and Suntory for these great results which confirm, if needed, that Japanese whiskies are among the best!