When the first Togouchi whiskies appeared on the European market in 2013, we were the first to clarify its origin and production process. Described, not without reasons, as "fake Japanese whiskies", Togouchi whiskies are then exclusively blends made from grain whiskies imported from Canada and Scottish malt whiskies. 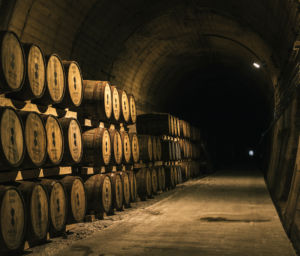 If these whiskies have undoubtedly contributed to the complexity of the label "Japanese whisky" (recently clarified by an association of Japanese producers), they have nevertheless quickly found their public, seduced by the blending know-how and by the contribution of an atypical aging place in Japan. By the way, it is worth noting that, unlike many brands that have appeared in recent years in mass distribution, Togouchi has always been transparent about the origin of its blends.

Today, a new page is opened with the completion of a process which allowed the opening of a distillery in Japan. This new step started at the beginning of the year with the change of the company's name from Chugoku Jozo to Sakurao Brewery & Distillery and, above all, today with the launch of these first entirely Japanese single malts (up to the malt used).

If you are a fan of Japanese spirits, the name "Sakurao" will probably not be totally unknown to you. Japanese gins have indeed been marketed for about 3 years under this brand and, therefore, embodies the first historical productions of the distillery.

Opened in 2018, the distillery was built in the town of Hatsukaichi, located in the Hiroshima region, on the edge of the Seto Inland Sea. This sea is separating the islands of Honshū, Shikoku and Kyūshū, three of Japan's four main islands. The region is bordered to the north by the Chugoku mountains, from which cold winds originate, and to the south by the sea, which creates warm, humid winds. These great differences in temperature and the sea air that infuses the barrels, deeply mark the character of Sakurao whiskies.

The distillery has two sites for maturing its production, a cellar on the spot where "Sakurao" single malts are matured, and a tunnel located further away in the town of Akiota, dug in the heart of a mountain covered by a luxuriant forest, where the temperature and hygrometry remain constant throughout the year. From this second aging site, "Togouchi" single malts are born, whose casks rest alongside the imported ones used for the historical blends of the brand.

Today, gin, malt whisky and grain whisky are produced at Sakurao, with separate stills, all under the watchful eye of Master Distiller Taihei Yamamoto and his assistant Miki Wahara. The distillery is indeed equipped with three brand new stills, including a hybrid, which have all been customized to meet specific expectations.

If the Togouchi blends, as we know them today, will coexist with the distillery's productions for some time to come, the ambition stated by Koichiro Shirai, the president of Sakurao Brewery & Distillery, is to aim at a 100% Japanese range.

The new Togouchi / Sakurao adventure starts now and will be followed closely in the coming years ! As such, you can find from now on the first Sakurao and Togouchi single malts on Uisuki, the online store for Japanese whisky.

And to go further in the discovery of the distillery, Sakurao has recently published a video in Japanese with English subtitles that we invite you to discover here :