Every year since 2014 Suntory creates a new limited edition of the famous Yamazaki single malt. The 2016 version has just been unveiled and will be available in Japan from 24 May. 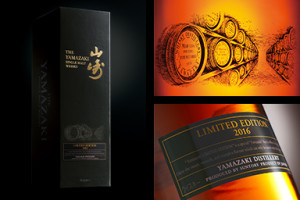 Created by Shinji Fukuyo, Suntory's Chief Blender, this whisky is bottled in a collector bottle which proudly displaying Yamazaki in gold letters and the rows casks of the distillery cellar.

Obviously, no information on the number of bottles available was unveiled by Suntory, but given the current market trend, the amounts will be very limited to specialized retailers and bottles sold at a reasonable price of about 10,000 yen will probably be available a few weeks later on resale sites for unreasonable prices.