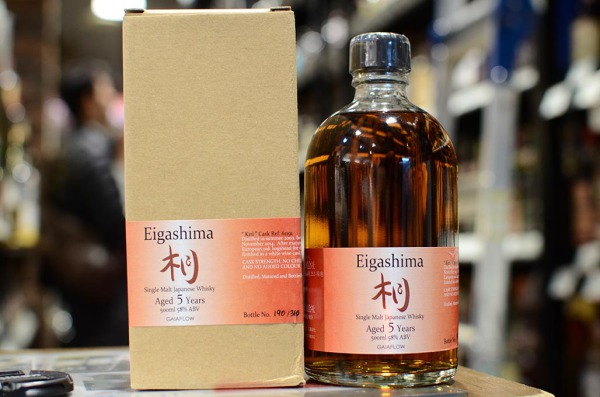 The new side of the small White Oak distillery with a limited bottling Gaia Flow; the Eigashima Kiri 5 years. Known for its lightly peated Akashi single malt and its Akashi blended whisky, but also its Tokinoka blend, White Oak Distillery didn't unveil new whisky for some time now ...

Founded in 1888 on the site of Eigashima in the city of Akashi in Hyogo Prefecture, the White Oak Distillery was the first in Japan in 1919 to get the spirits distillation license and according to legend would consequently be the first to have distilled whisky.

In its early days the distillery only produced blends, and this artisanal production remained reserved for the Japanese market until the construction in 1984 of a new distillery specially dedicated to the malt whisky distillation. Located near the sea, not far south of the city of Kobe, and enjoying a mild and stable climate, White Oak distillery has created its Akashi single malt in 2007.

Gaia Flow is a Japanese company specialized in importing Scotch, Irish, American, European whisky, and many other spirits. The company has partnered with White Oak distillery to make private bottlings whose Eigashima Kiri 5 years is the second.

Distilled in summer 2008, this brand new single malt was first aged 3 years in European oak casks (european hogshead), then it was refined two more years in Japanese white wine casks before being bottled in 2014 non coloured and cask strength 58% volume in the famous 500ml White Oak's bottle. This limited edition of 360 bottles will only be available in Japan at a price of 5723 yen (about € 38).