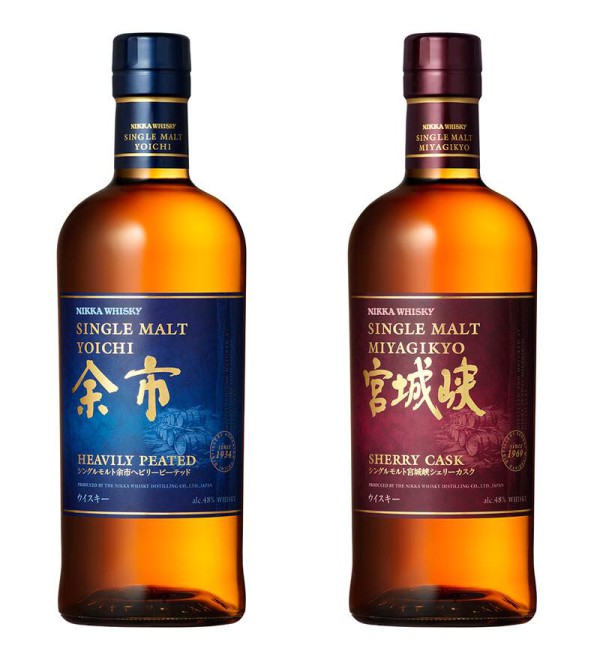 Following the announcement a few weeks ago of the end of Yoichi and Miyagikyo aged versions, Nikka Whisky had already planned their replacement by two new no age statement single malts available from 1 September 2015. But another limited surprise is also planned for September !

In addition to its both new replacements single malts, Nikka Whisky unveiled a couple of new Yoichi and Miyagikyo limited editions ! A very peaty version for the first one, and a sherry casks only version for the second distillery.

Due to the stock depletion on old Japanese whiskies, some big changes have taken place recently in the whisky industry in Japan, like from now on Suntory's discontinuous aged whisky production, or the announcement of the end of Nikka's aged single malts.

Recently rewarded "Distiller of the Year" at ISC 2015, the Japanese brand founded by Masataka Taketsuru will launch 2 new permanent single malts ; one from Yoichi, one from Miyagikyo, both bottled at 45% abv. Their composition hasn't been revealed yet, but it seems to be a blend of whiskies rather young and aged in different type of casks. 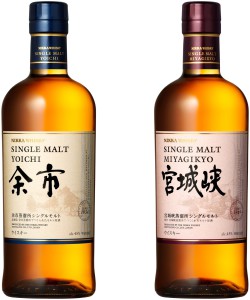 As the name clearly suggests, Yoichi Heavily Peated is a version where peat takes all the place, created from heavily peated single malts only. It will proudly express the intense character of the distillery throughout the taste of peat. And to pay tribute to the influence of the sea on Yoichi's single malts, Nikka created a deep blue label recalling the color of the sea.

For Miyagikyo distillery founded in 1969 whose single malts are known for their sweetness and fruity aromas, Nikka will release a blend of whiskies aged in sherry casks, the famous barrels of Spanish wines that transmit a very sweet unique taste. To recall the maturation in Spanish wines casks, a purple colored label has been specially created to dress the bottle.

These two limited editions whose composition hasn't been revealed yet, will be bottled in 3,000 copies without chill filtration at 48% abv preserving all their aromatic power.

Both new permanent Nikka's single malts plus Yoichi Heavily Peated and Miyagikyo Sherry Cask, will all be available from 1 September 2015 in Japan, and hopefully maybe later in the rest of the world.