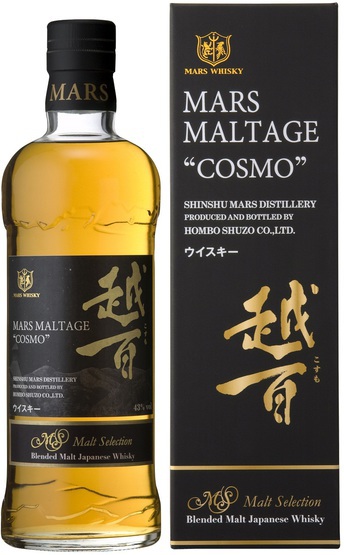 Hombo Shuzo Group Ltd, owner of Shinshu distillery, is continuing its strategy of developing its Japanese whisky production by introducing a blended malt named Mars Maltage "Cosmo" that is now part of the permanent range of Mars Whisky !

Available in Japan since the beginning of July 2015, Mars Maltage "Cosmo" has integrated the permanent range of Mars Whisky, and will be soon available in Europe.

This new Japanese blended malt whisky is bottled at Shinshu distillery founded in 1985 in the heart of the Japanese Alps, which after having been asleep for several years, resumed its malt distillation activity in 2011. Its name "Cosmo" refers to a peak located within mountains surrounding the distillery.

As you may know, a blended malt is made from the vatting of single malts produced in two or more different distilleries. Furthermore as far as we know Mars Whisky only owns one malt distillery, and "Cosmo" is a blended malt, so what may be its secret ? 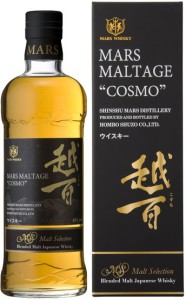 Like all producers in Japan, the brand benefited from the success and the strong demand for Japanese whisky on the domestic market as well as in the rest of the world, and to continue its development Mars people decided to increase production and to introduce a new permanent whisky.

But in order to ensure a permanent whisky although their home production is not enough to release big quantities, they also decided to act like Scottish producers by using some imported single malt whisky. But the origin of this imported whisky is safely kept by Mars people, we only know that it's coming from Scotland.

This is an unusual practice in Japan because Japanese producers traditionally do not exchange their production and do not appeal to other producers in order to meet the increasing demand.

Bottled at 43% ABV, it's diluted with water 100% Japanese from sources close to the distillery in which water has been filtered through the granite rocks for years, ensuring excellent water quality and exceptional purity.

Some will say that this is not really a Japanese whisky, but those who tasted it during its presentation at Whisky Live Tokyo 2015, were pleasantly surprised by the expertise in the art of blending of Shinshu distillery Chief blender.