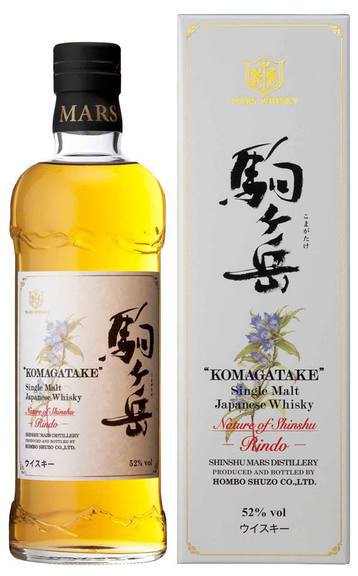 The least we can say is that they are working hard at Shinshu distillery ! Mars Whisky introduced a new Komagatake single malt at the Tokyo Whisky Festival 2015 named "Rindo, Nature of Shinshu."

Since Shinshu distillery revival after being sleepy for several years, Mars Whisky continues to develop its production and regularly creates new releases limited to a few thousand bottles such as Komagatake single malts "Revival 2011", "American & Sherry Oak" or blended whisky Tsunagu but also includes new references to its permanent range such as the "Twin Alps" or blended malt "Cosmo".

Mars Whisky strategy also turned to conquer the European market, with the use of 70 cl bottles, and an exclusive distribution offered to Number One Drinks which already distributes Chichibu, Hanyu and Karuizawa whiskies. Consequently, good news, like the new single malt Komagatake "Rindo, Nature of Shinshu", some of the next single malts or blended malts should now be available in Europe.

All distilled in 2012, some of the single malts selected for the final blending were aged in Japanese wine casks that some of them were used for over 20 years in wine maturation. The single malt Komagatake "Rindo, Nature of Shinshu" was bottled at a high alcohol content of 52% abv to maintain the integrity of its aromatic profile. Through the whisky serie "Nature of Shinshu", the Chief Blender will introduce you to a rich and beautiful universe of taste just like the Japanese Alps flora and fauna surrounding Shinshu distillery.

This new Mars Whisky named "Rindo" which means gentian in Japanese, was produced in 8200 copies, and it's the first single malt from the "Nature of Shinshu" serie that represents the mountains flower of Nagano region where is nestled the distillery.