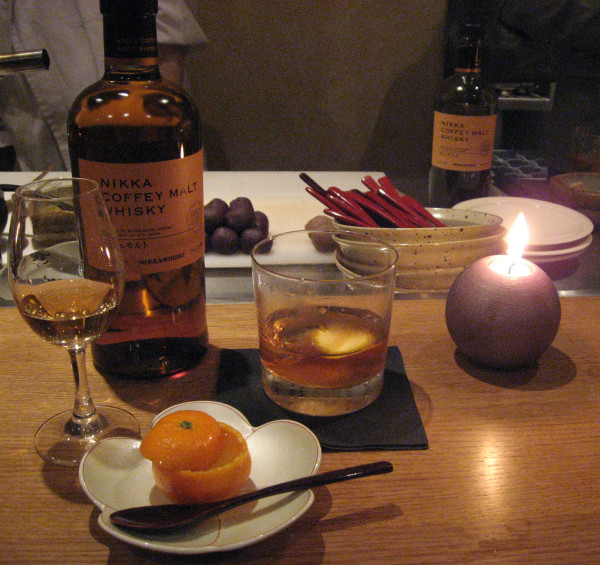 To celebrate the launch of its latest whisky, the atypical Coffey Malt, Nikka has partnered with Walaku a traditional japanese pastry shop located in Paris, to offer two sweet creations typically japanese and subtly married with the new single malt of the range. We had the pleasure to taste them, the result is especially delicious and very surprising ! 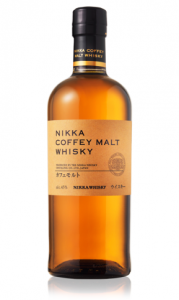 To understand the specificity of this new Nikka single malt, we must first recall that whisky is of course single malts and blended malts produced from malted barley and distilled in traditional pot stills.

But it's also blends which are a mix of single malts with grain whisky made ​​from grains other than malted barley, mainly corn, and distilled in column stills or Coffey stills. These grain whiskies are sometimes bottled as single grain such as the Nikka Coffey Grain.

It should therefore not be mistaken, the Coffey Malt has nothing to do with coffee .. For the record , Coffey is the name of a scottish customs officer who perfected the performances of column stills in the early 19th century.

Thus, Coffey Malt is a single malt which has the specificity to be distilled in Coffey stills used for grain whisky, instead of the usual pot stills. The result is a whisky with a unique texture and rich and unusual flavors, from caramel with notes of citrus fruits through chocolate and flan.

This new experiment is bold, and facing the success of the few Coffey Malt single casks released occasionally, it now incorporates permanently the Nikka whisky range. Distilled in the two column stills of Miyagikyo distillery, and bottled at 45 % abv, the Coffey Malt is compound of single malts aged in average for ten years. 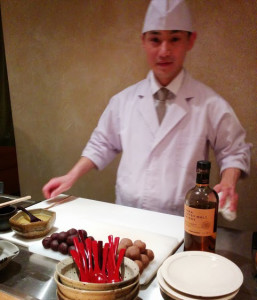 Naturally to celebrate the launch of its new whisky, Nikka suggests the association with the poetry and harmony of japanese pastry called wagashi, a term derived from the words "wa" which means "japanese" and "kashi" which makes references to sweets.

To taste these two wagashi, you should go before the end of march at 33 rue Rousselet in the 7th arrondissement of Paris and push the door of the little pastry Walaku which is actually an annex counter of the famous traditional japanese restaurant Aida.

Outside and inside, the decoration is simple, elegant and harmonious, like the true japanese style. But what surprises most in the pastry is its small size, it is the scale of traditional japanese shops. Suddenly, the atmosphere is very cozy and you can sit at the counter facing the pastry chef, Takanori Murata, which will prepare you his delicious sweetened Nikka Coffey Malt creations, the Yakiguri flamed and the Fuyu no ne. 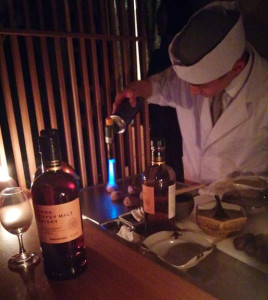 The Yakiguri, which literally means "roasted chestnut", is a small ball of red bean paste wrapped in a chestnut paste, and is grilled on a teppan, the japanese traditional grill, then flamed with Nikka Coffey Malt.

It's eaten while still warm and the finely crisp outside texture is deliciously creamy and tender inside. Nikka Coffey Malt aromas of caramel, citrus and cocoa, marry perfectly with the sweetness of the chestnut. 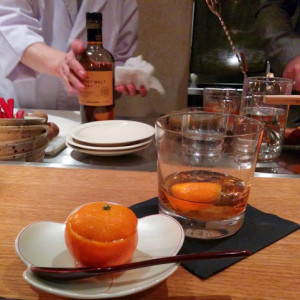 This poetic creation called "sound of the winter", is made from a carefully emptied clementine which is filled with a mizuyokan (agar-agar) jelly of the squeezed juice. A layer of Nikka Coffey Malt syrup is added on top to complete the creation of chef Takanori Murata and gives a subtly aromatic complexity associated with the caramelized sweetness of the clementine.

The Fuyu no ne is preferably savored fresh, and the marriage between the jelly texture, the clementine freshness and the whisky flavors is pleasantly surprising.