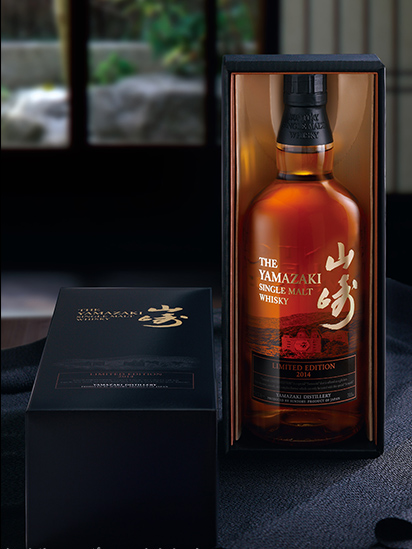 Today, Suntory unveils an exclusive version of the single malt whisky, produced from their very first distillery and named Yamazaki Limited Edition 2014. We invite you to discover this newly composed brew that may be mistaken as a simple no-aged single malt...

Due to the inabundance of old whiskies, and after presenting their new permanent versions of the Yamazaki and the Hakushu, known as the Distiller's Reserve, Suntory surprises us once again by offering a limted edition of its Yamazaki single malt.

Like for the Distiller's Reserve, Suntory expertly refines their compositions, proving to us once again that quality does not necessarily require a certain number of years. Even if we could consider the Yamazaki Limited Edition 2014 as an ageless brew, it is a newly assembled work of young and old whiskies that has been aged in barrels of different origins.

The Yamazaki Limited Edition 2014 is composed of three single malts:

Bottled at 43 % above volume, this newly brewed jewel is now available in Japan at a reasonable price of 8000 Yens. We hope that one day this new single malt will soon be at the European market and delight the many whisky lovers abroad !