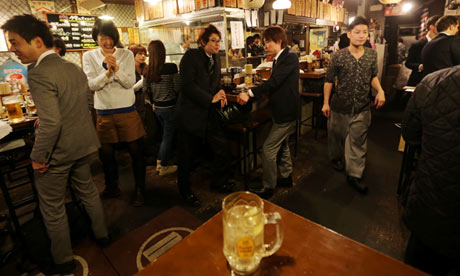 "The Japanese have long been committed whisky drinkers, and until recently that meant holing up in a small, dark den designed for serious drinking. But the country's leading distiller has been revolutionising drinking culture with the aid of a pint glass and a more than generous slug of soda.

The whisky highballs introduced by Suntory, the privately owned Japanese drinks conglomerate that has the lion's share of the country's whisky market, seem to have worked. Sales have been up more than 10% a year over the past three years."

An article dedicated to Suntory's strategy to create buzz around whisky in Japan by promoting a very specific way of drinking whisky: the Highball. A mix of whisky, sparkling water and ice in a pint glass that we've already described in our article on "How to drink japanese whisky"